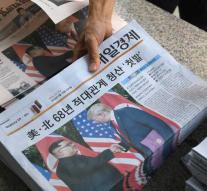 The Americans and their South Korean allies hold joint military exercises on a regular basis. North Korea sees these exercises as preparations for an invasion. Trump said Tuesday in Singapore that the 'provocative' and 'expensive' exercises are being suspended for the time being.

' The 'war games' are very expensive '', stressed Trump, who said that his country is paying for most of the costs. He stated that because of the negotiations with North Korea, it is 'inappropriate' to hold such exercises.