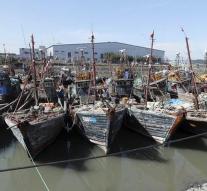 Hat vessel was involved in an action against Chinese fishermen. According to South Korea's Ministry of Public Security the ship disappeared from the Coast Guard in the waves when it was rammed by a Chinese fishing boat. Therefore nobody was injured.

South Korea announced the use of weapons do not go out of the way in addressing the Chinese fishermen.