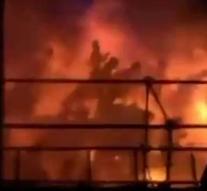 - The organizer of a fateful party at a water park in Taiwan has been sentenced to four years and ten months in prison, reports. He is accused of negligence. During the party, a fire broke out, fifteen people died. More than five hundred people were injured.

The judge ruled that Lu Chung-chi had not taken the right preparations to prevent color powder by the stage lights caught fire.

The fire broke out last June on a podium after a dust explosion. The fire quickly spread to the amusement park in the city of New Taipei City. At the party were, according to local media definitely 10. 000 predominantly young people come down.

Because much powder hung in the air, people could see where the emergency exit was bad. Many visitors were in addition to swimwear, so their skin was exposed to the fire.