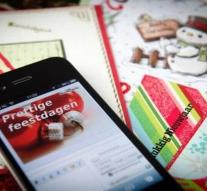 amsterdam - Homeless people usually do not get Christmas cards because they have no address. But who is this group still wants to send a warm Christmas or New Year's greeting, which can now do via SMS. For a mobile phone, the homeless usually does.

The Salvation Army and Vodafone Foundation have opened a special number for the action: 06-25122016. Deputy Prime Minister Lodewijk Asscher and police spokesperson Ellie Lust send Monday as first a message.

All text messages after receipt spread through the Street Messenger network. normally use this aid workers to inform homeless people via SMS or WhatsApp on practical matters such as opening hours of the reception, extra beds during the frost or a free meal or hot shower.

The Christmas messages will be shown live on screens that come in various reception centers of the Salvation Army in Amsterdam, Utrecht and Eindhoven.