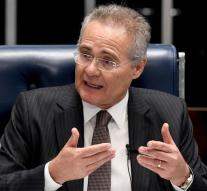 - Senate President of Brazil, Renan Calheiros, on Monday removed from office by the Brazilian Supreme Court. The president of the Senate hearing last week that he is accused of embezzlement.

The deposition of Calheiros is a new blow to the Brazilian President Michel Temer. His government has been severely weakened by corruption scandals while trying to implement unpopular austerity measures in the country.

Calheiros's position had become untenable because eleven investigations into corruption charges against him. Most are related to massive corrupt practices by state oil company Petrobras.