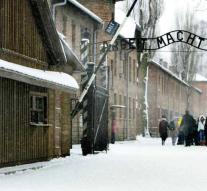 warsaw - The Polish Senate has adopted a controversial law that makes it punishable to suggest that Poland has been involved in crimes committed by the Nazis in the country. With the law, the Polish government wants to prevent Poland being blamed for the Holocaust, among other things.

Especially the term 'Polish camps', which is mostly used by foreigners, was the reason for this measure for the right-wing government in Warsaw. The indication suggests that the Poles are partly due to the Holocaust. Someone who designates the concentration camps of the Nazis in Poland as 'Polish camps' can from now on be punished with a prison sentence of up to three years.

The bill received a lot of criticism from abroad. Israel in particular is vehemently opposed to the new law, which has yet to be signed by President Andrzej Duda.