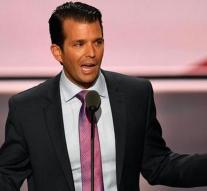 washington - Donald Trump Jr. appears on Thursday for the Senate Commission investigating allegations of Russian interference in the presidential elections. It is a closed session.

Trump (39) was in a public hearing on the case in July. He then agreed with the committee to talk to a private meeting.

The lawyer of Trump Jr., Alan Futerfas, said his client 'looks forward to a professional and productive meeting, and hopes he can serve the commission. 'It is clear that Trump's eldest son in the run-up to the elections in June 2016 had contact with a Russian lawyer who maintains ties with the Kremlin.

The US intelligence services believe that the Russians have done everything in their power to make the elections in November 2016 in favor of Trump. There is also a government investigation into the affair. This is led by Robert Mueller, former director of the FBI.

Moscow has always rejected any suggestion of interference.