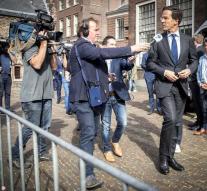 the hague - The parties can no longer make such list connections in elections. The First Chamber decided on Tuesday that it would no longer allow such a power bundle, which could provide an extra seat.

The parties get the seats they have completely worn themselves in elections to the Lower House, Provincial States, City Council or European Parliament. The remaining seats, the so-called rest seats, apply to the parties who hold the most 'remaining votes' at the full seat. Because that system works for the benefit of large parties, it is smart to enter a list connection. Such a party combination is more likely to be a residual seat.

The VVD wanted to abandon the possibility of list combinations because a vote could then be reached by a party other than the voter. Opponents like the PvdA and the Christian parties agree that such a voice could better benefit a spirit-related party than that a whole other party benefits from. However, the VVD received support from D66, PVV, SP, 50PLUS and Party for the Animals and pulled the longest end.

The opponents of abolition made another attempt to postpone and submit to the commission investigating the functioning of Dutch parliamentary democracy. But they also found no support for that.

At the Dutch parliamentary elections of 15 March, list connections were still possible. PvdA and GroenLinks and ChristianUnie and SGP joined those elections together, but did not get seats anymore than they would have achieved on their own.