Home / World / Selling guns suspended in Philippines by US 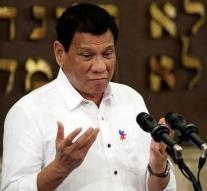 - The United States has suspended the planned sale of 26,000 machine guns to the National Police of the Philippines because of concerns about human rights violations. Ben Cardin, the Democratic chairman of the Senate Committee on Foreign Relations, objected to the sale, said members of the Senate.

The relationship between the US and the Philippines state since the inauguration of the Philippine president Rodrigo Duterte heavy pressure. Duterte has piqued responded to US criticism of its violent campaign against drug users and dealers. Since he took office on June 30, police or paramilitary groups have slain more than 2,300 suspected users and dealers.

Earlier this month, Duterte said that he did not care if the US wanted to supply weapons, because Russia and China but some would like it.