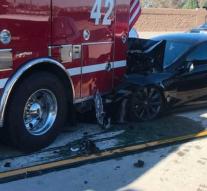 san francisco - In Los Angeles, a Tesla rammed a fire engine from behind during a test. No injuries were surprisingly enough.

The Tesla Model S crashed on the highway against the stationary fire brigade. It was there because of an accident. Despite the fact that the Tesla drove 100 kilometers per hour, there were no injuries. How this accident could have happened is unclear. However, the Culver City Firefighters know 'to stay alert while driving'. The driver said he had the car on autopilot.