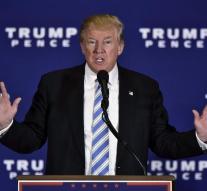 - The foundation of the new US president Donald Trump would have violated a ban on 'self-dealing'. In a form intended for the Internal Revenue Service IRS would be indicated inter alia that the Trump Foundation money is channeled to a 'unqualified person. The form of the tax return for 2015 was uploaded Monday on the website Guide Star, which follows nonprofits.

The Washington Post reports that the organization has committed to self-enrichment. Through which money transfers they have violated the prohibition of self-dealing. That law prohibits leaders of nonprofits to use donation money for himself, private companies and family members.

In one part of the form asks the IRS or the foundation income is transferred to an 'unqualified person'. In this case, such a person Trump, a family member, or one of its companies. The foundation ticked 'yes'.

The Washington Post could not confirm whether the same forms are also sent to the IRS actually.