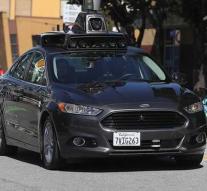 That writes The New York Times. The Uber car was in automatic mode, while there was a person behind the wheel as a back-up. According to police, the woman was hit when she crossed to a zebra crossing.