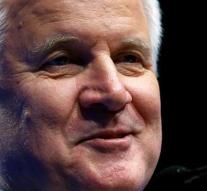 - The Minister-President of Bavaria Horst Seehofer has Donald Trump invited to visit Munich. The CSU leader has congratulated written shortly after his election, the new president of the United States and stressed that he 'is always welcome in the Free State of Bavaria.' This was announced by the Bavarian government Thursday.

Seehofer Trump would like to welcome you all in February at the Munich Security Conference. As one of the few German and European politicians warned shortly after the US elections exaggerated criticism of the political style of Trump as president once. 'I advocate his action await in practice. '