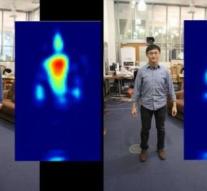 - US researchers have developed a device that uses wireless signals to see through walls and can identify the people behind it. The device RF Capture was developed at the Massachusetts Institute of Technology (MIT).

RF- Capture emits radio waves that are reflected from various parts of the body, and then reflected back to the device where they are analyzed. Among others, the intensity of the radio waves is measured, after which a complex algorithm is in a position to observe the silhouette of the body type.

The device can indicate where arms, hands, legs and head are located and is able to identify up to fifteen different people with an accuracy of 90 percent. RF Capture can thus define who you are, where you are and even what hand you're moving while the device is located within a building and you are out.

According to the researchers of the technology have significant consequences for the film, games and elderly. To capture their movements actors must now carry various sensors on their bodies and are located in a room full of cameras. RF Capture enables sensors unnecessary and may even perceive the movements when the actor is in another room or behind an object. For gamers this means that they may have with a game from another room or an action to be triggered based on which hand they light interaction.

The researchers are currently working to incorporate the technology into a home device that can make emergency calls when it sees that an occupant has fallen. In the future, the technology can also be used to heat the house and switch the lights on and take off by looking into what room you are in.