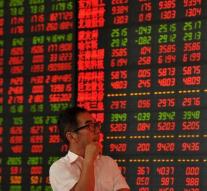 - Does the Chinese economy cool down? J.P. Morgan suspects, among other things, based on satellite imagery of the country. 'You see less activity. It indicates that the Chinese government is reducing its incentives, 'said Zsolt Papp of the American business bank.

Monday, we know if the figures for Chinese economic growth are coming out in the second quarter. China started the start of the year with a beautiful growth of 6.9% in the first three months, but almost no-one expects the new figure to come over.

Just as there is some steam from the economy, foreign investors are just a bit tempted to move into Chinese stocks. Index Manager MSCI recently decided to include 222 Chinese companies in its MSCI Emerging Markets Index next year. Consequently, investors who follow the index are forced to invest in those shares as well.

MSCI expects an additional inflow of approximately $ 17 billion. That's just a drop on the Chinese domestic stock market (the so-called A shares), which is estimated to be $ 7 billion. According to the Office Capital Economics, this is only 2% in foreign hands.

The Shanghai stock market is now the fifth in the world in terms of market capitalization. Hong Kong is number six, Shenzen at number nine. Many Western institutional investors and individuals want to be in the first position to pick up a grain. 'We took another customer for $ 100 million this morning,' said Rob Marshall-Lee. He is the manager of the Newton Global Emerging Markets Fund, an investment fund of financial giant BNY Mellon.

The Marshall-Lee fund invests in 50 to 70 companies in emerging markets. Last year there was only a slight return, and even loss in 2015, but this year is going to be wonderful thanks to the bullish on the stock exchanges of China and India. Because India is also a huge market that you can not leave as a global investor.

'We have a lot of Indian consumer companies. India just comes from the bottom of a cycle. There is recovery, 'says Marshall-Lee. You can also see the fast-growing Sensex index of the Mumbai stock market.

Marshall-Lee raises many misunderstandings about China: 'People think that the country drives exports. But the manufacturing industry is shrinking. The growth is from the service sector. Chinese want better education, better health care. '

Twenty percent of its fund consists of Chinese internet companies, such as the explosively grown internet retailer Vipshop, search engine Baidu and Alibaba webshop. Good for investors, though less for consumers, is that these internet companies are protected on the market by the Chinese Communist regime. 'It's more checked. They do not leave Facebook, Youtube and Google. '

About India, Marshall-Lee is even more talkable than China. 'The Indian population is expected to grow 40% over the next twenty years and the government is doing well. Corruption is being tackled and aggressive to technological innovation. Suddenly everyone also has a bank account. The profits are still lean. '

The French asset manager Comgest has a set of emerging markets funds. There is € 11 billion. Bargain hunters are in the wrong address in India, says Rob Deneke from Comgest. 'India is one of the most expensive stock markets in the world. We understand that India should be more expensive because there is so much potential. But you should not be excited. Often it does not happen. '

Comgest therefore finds it difficult to find suitable investments in India. 'One of the companies on our wish list is Hindustan Unilever. But that has a 50-point rate. Then we get off. There is a lot of hope in such valuations, 'said Deneke. He also sees danger in the broad lending. 'The percentage of bad loans amounts to 10 to 12%. That's a lot higher than in China. Credit growth has been reduced. '

One of Comgest's positions in India is Powergrid, with electricity networks throughout India. 'There are many electricity problems in India,' explains Deneke. 'Even in a five-star hotel you can not have electricity for an afternoon. Another position is Infosys, an IT service company. Both are therefore not directly linked to the Indian consumer. '

Deneke: 'In the long term, ten years plus, India is the market where you have to sit. There is a lot of low-hanging fruit. They also have great ambitions. The problem is: it will never be so good. You can keep a beautiful powerpoint presentation for you to be in India. But reality is often different. '