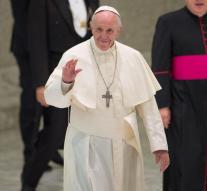 vatican city - The Vatican is preparing for a terrorist attack in Rome. Principal safer Christoph Graf calls it a 'matter of time' before a Bacelona-like attack in Rome can take place.

Security measures have been increased since the attacks in Nice. That happened at various religious hotspots in Italy, but of course, special attention is paid to the Vatican. Around the Saint Peter's Basilica there were barriers raised and army vehicles placed.

'It may be just a matter of time before we see such an attack in Rome, but we are prepared,' said Christoph Graf, the commander of the Swiss Guard, who has secured the Pope since the 16th century. She made her pronouncements in the Swiss city of Solothurn.

Rome has been the center of threats by Islamic State (IS). When IS warriors bycapted twenty-one Egyptian Christians in 2015, one of the bullies called: 'Security is something for your crusaders, just one thing you can dream of. We will conquer Rome. '