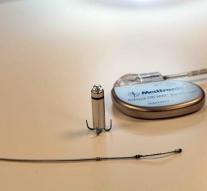 washington - Nearly half a million pacemakers who may be hacked will get an update. It is about implanted cardiac devices from St. Jude Medical, which was taken over by Abbott Laboratories this year.

According to the FDA, the American Association of the Dutch Food and Welfare Authority, malicious people can take the smart implants without the carrier knowing that. For example, they can give the pacemaker a different rhythm. They can also cause the battery to drain faster than the intended purpose. There are no reports that this has really happened, emphasizes the FDA.

For the update, patients should go to a doctor. It takes a few minutes. When done, the device settings can only be modified if the carrier permits.

In the United States there are 465,000 devices. It is not known how many people in the Netherlands have such an implant.