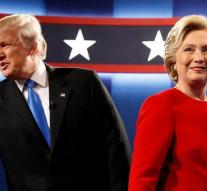 - The US authorities have taken additional security measures with a view to the elections on Tuesday. An anonymous official said that 'self-formed extremists in the country' still a major concern.

But also foreign terrorists could seize the ballot for attacks. The federal government has that special New York City and the states of Texas and Virginia warned. It would be 'an unspecified threat' of supporters of al Qaeda.