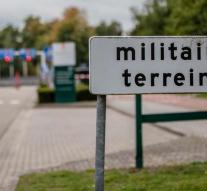 - The court in Den Bosch on Tuesday sentenced a 37-year-old man for the theft of goods from a military barracks in Oirschot. The man worked as a security guard. Between November 2012 and April 2014 he stole more boxes with money, tourist receipts, power tools and equipment such as a game console, digital camera and a projector.

The man has been sentenced to the maximum 240 hours of community service and a suspended sentence of six months.

The Public Prosecutor had a prison sentence of nine months, of which three months were suspended demanded. However, the court took into account that the man was fired after his arrest and because of that got into financial difficulties.,, In these circumstances, it is currently not appropriate and necessary to send the man to prison, 'said the judgment.