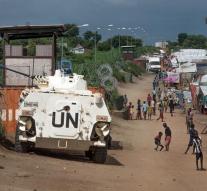 - The United Nations Security Council on Friday approved the deployment of forces in the South Sudanese capital Juba. The force consists of four thousand soldiers. The deployment is part of the UN peacekeeping mission in the country.

If not cooperate the government of South Sudan, the risk of an arms embargo to be imposed against the country. Earlier this week, the government has already said no to want to allow extra peacekeepers. Although the country has agreed to an African force, which may not be added to the UN peacekeeping force. Juba believes that citizens or are inadequately protected. Moreover smacks the insistence of the United States on the deployment of extra peacekeepers to imperialism, says the government.

The resolution, from the pen of the US, was adopted by eleven votes. Four countries abstained: Russia, China, Egypt and Venezuela.