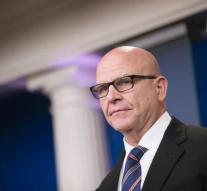 taormina - US National Security Advisor H.R. McMaster is not concerned about the reports that Jared Kushner, the son-in-law and adviser of Donald Trump, tried to open a secret communication line with the Russians even before the president entered the White House. That included the Washington Post.

Last week, McMaster's predecessor Mike Flynn, on behalf of Trumps Transit Team, announced a proposal on such a backdoor channel with Russian Ambassador Sergej Kisljak. Kushner would have been there.