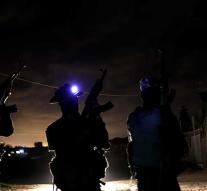 tel aviv - The Israeli security service Shin Bet has rolled up an extensive terrorist network of Hamas in the West Bank in the Nablus region. The militant Palestinian group had more than twenty members who wanted to carry out bombings in major cities such as Tel Aviv and Jerusalem. The cell also had targets on the West Bank. That was announced on Sunday in the media.

By taking action at the end of April and arresting the suspects, including the two leaders, the secret agents said they had thwarted some terrorist acts at the last minute. Several bombs were defused, including a 10 kilo copy that could be detonated from a remote cell phone. Furthermore, guns and explosives were seized and raw materials to make explosives.