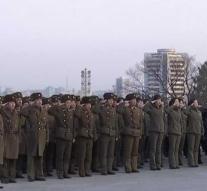 seoul - In North Korea a large military parade was held Thursday without being broadcast by the media. The parade was a day before the opening of the Olympic Winter Games in South Korea, where North Koreans also went. Approximately 13,000 soldiers took part in the parade that was viewed by around 50,000 people.

Some observers suspect that dictator Kim Jong-un does not want to draw too much attention with soldiers, just before the games, especially now that the tensions between Stalinist North and Western South Korea have diminished due to the sports festival. He may later broadcast statues of the parade through state television.

In addition to athletes and a deputy minister, Kim also sends his sister Kim Yo-jong to the Olympic Games in Pyeongchang and Gangneung. She is expected to arrive in a private plane on Friday. In Gangneung, the North Korean sports delegation consisting of 46 persons was officially welcomed on Thursday. In addition, South Korean folk dances were performed and a female music band from North Korea also played.