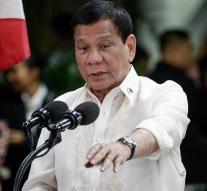 manila - The head of a police station in the Philippine capital of Manila was fired after a secret cell was found in the building. Researchers discovered twelve people in the tiny, windowless space. The detainees said they were detained until paid for their release.

The Human Rights Commission (CHR) found the hidden cell Thursday evening. The detainees in the small room told a committee spokeswoman that they had been detained for a week. They would also be tortured.

The regional police chief informed Friday that the head of the office was fired and that the matter was being investigated. He thanked the CHR and promised that police crimes would not be violated by law enforcement officers. A spokesperson for President Rodrigo Duterte praised the police for the 'catchy' action in the case.