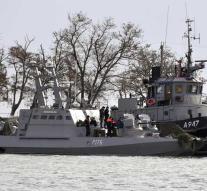 kiev - Among the crew of the Ukrainian navy vessels that have been brought in by Russia are some members of the Ukrainian secret service. That has declared that service Tuesday. One of the agents was seriously injured because he was hit by a Russian projectile.

The Russian border guard stopped three Ukrainian navy ships that enter the Sea of ​​Azov via the Kerch Strait. The Ukrainian ships were first shot and then confiscated. The 23 or 24 crew members were taken away.

Various countries have called on Russia and Ukraine to solve their problems. Calls came from, among others, Germany, Austria and Turkey.