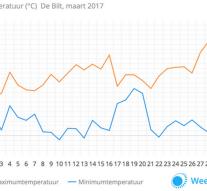 - March ends when the ever measured second warmest March. The average monthly temperature in De Bilt is from 8.6 degrees to 6.2 normal, Weather Online reports. Record is 1991 by 8.8 degrees.

The month began with mild and wet weather, but from the 10th went most days dry, mild and sunny. This brings the number of fair-weather days from 15 (against 3 normal), which is a record for March. The record was held by 2014 with 14 nice-weather days.

On a fair-weather day, it is almost dry, the temperature is above normal and the sun shines at least half the time they may seem. The sun also shone much, on average across the country, the number of sunshine hours to approximately 178 to 125 normally. Thus March 2017 among the top 10 most sunny.

Especially during the day it was considerably warmer than normal this month, but the nights were relatively mild. De Bilt came only three times to light frosts, while eight frost days are normal. The coldest night had a minimum of-0.9 degrees. Only in 1912 and 1967 the monthly minimum in De Bilt was even higher, respectively 0.4 degrees and 0.3 degrees. The lowest temperature this month was measured on March 25 in Leeuwarden:-3.9 degrees.

From March 10 spring erupted. Since then, except for a few bad days from the 17th to the 20th, fine spring weather. The highlight we experience this week with the first warm days. Friday is the hottest day of the month in the southern half of the country limits of 22 to 23 degrees. Probably even the warmest March 31 ever. Therefore, the temperature in De Bilt should rise to 20.5 degrees or more.

De Bilt has a high number of dry days 18 to 10 normally. Nevertheless, on average across the country was about the usual 68 mm of rain. Especially the first days of the month went very wet and there was a short wet period from 17-20 March.

The month started very turbulent. Hoek van Holland and IJmuiden was measured on 2 March 9 wind with heavy gusts. That same day it arrived in Groningen and Drenthe in a winter surprise. In several places was intense rain in (wet) snow and locally colored the white roads. Also on March 20 was temporarily 9 Bft. measured at Houtribdijk with a heavy gust of 95 km / h.