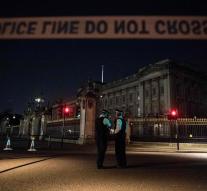 london - The British police released a man arrested after the terrorist incident at Buckingham Palace. There another man (26) last week attacked three agents with a sword.

The police had arrested the thirty-year-old man in London on suspicion of involvement in the incident. The authorities informed Wednesday that the man was not charged with charges. The chief suspect in the case is still stuck.

Several agents became lightly injured when they arrested the suspect.