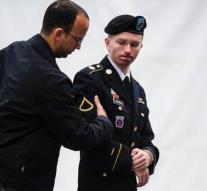 - Whistleblower Chelsea Manning, formerly Bradley Manning, has again attempted suicide in prison. She tried on 4 October to end her life. Her lawyer announced this Friday that the New York Times.

Manning is a sentence of 35 years out because she passed classified documents to WikiLeaks. She is in a military prison in Kansas. Manning did the suicide attempt when she was a week was put in solitary confinement.

That was the punishment for the first suicide attempt in July. they may be punished again for her new endeavor. Her lawyer complains that she does not get the proper care in prison.