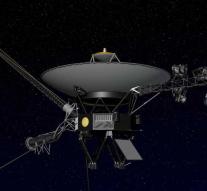 washington - After more than forty years of continuous flying, the American spacecraft Voyager 2 has left our solar system. That happened on November 5, the American space agency NASA announced Monday. The Voyager 2 still does it. It flies at almost 18 billion kilometers from the earth and measures the area through which it flies.

Our sun is constantly shooting plasma particles around. That creates a kind of bubble, which also contains the earth. That bubble, the heliosphere, protects us from cosmic radiation. On the edge, the plasma particles slowly transition into the endless space between the stars, the so-called interstellar medium. The particles do not come from the sun, but from the rest of the universe. The border area is unexplored territory for scientists. ' By working on Voyager I feel like a scout. Everything we see is new, 'said lead researcher John Richardson.