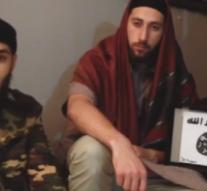 rouen - The second culprit of the murder church in the Norman village of Saint-Etienne-du-Rouvray was known to the French secret services. The 19-year-old Abdel-Malik Nabil Petitjean was suspected of links with jihadists, say sources told Reuters. He'd come from a French village on the border with Germany.

Petitjean had a tick behind his name with the secret services. He would be one of the 10 500 radicalising French.

Earlier, the identity of the co-perpetrator of Petitjean was announced. It concerns also the 19-year-old Adel Kermiche.