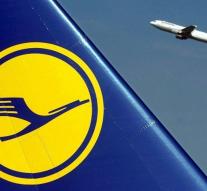 frankfurt - Lufthansa has 520 short and medium-haul flights Saturday to cancel because of a strike by cabin crew. An estimated 58 000 travelers have been affected.

Also Friday stopped the cabin crew. When 290 flights had to be canceled, including fifteen overseas destinations. More than 37 000 travelers were unable to make their scheduled flight.

The stewards and stewardesses of the German airline Lufthansa oppose cost savings that will enforce through a new collective agreement.

Cab union UFO announced Sunday a strike break is inserted, but travelers should be aware that they are coming week from Monday to Friday can not fly with Lufthansa.

A spokesman for UFO said Saturday that in the course of Sunday will be known from which airports and on which routes the next week there may be flown.

The German airline group had to deal in the last year and a half more often with strikes, but by pilots. They also oppose intervention in their working conditions.