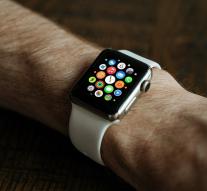 - Apple is probably in March next year with the second generation of its smart watch. The technology giant would also present a version of the iPhone 6, with a smaller screen.

Reported website 9to5Mac based insiders. Apple would be busy planning an event for next March. From April, the new Apple Watch would then be shipped to stores.

What new features Apple's smart watch will take is not yet clear. The company is working on a new camera and new applications for the sensors to Apple Watch.

Furthermore, according to 9to5Mac, Apple would introduce the so-called iPhone 6c. Which would get a 4- inch screen, and therefore smaller than the 4.7- inch screen on the iPhone and the iPhone 6s 6s Plus. Some users might prefer a smaller screen, because the phone easier than with one-handed operation.