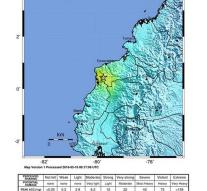 - Ecuador is the second time within a day hit by an earthquake. The second quake, measuring Wednesday at the end of the morning (local time) took place, was with a magnitude of 6.8 a fraction more powerful than that of a few hours earlier, US seismologists report. The epicenter was again just northwest of the capital Quito, near to that of the previous quake.

The earthquake on Tuesday night had a magnitude of 6.7. The epicenter was in the fishing village of Mompiche, 50 kilometers south of the coastal city of Esmeraldas. The experts immediately said no tsunami expected in the Pacific.

A quake with a magnitude of 7.8, the worst in nearly seventy years, struck the South American country last month in the same region. The natural disaster took 650 people dead and more than 16 000 people were injured. According to President Rafael Correa seems the damage this time to attack them.


In some places in the coastal region fell after the first quake all the power. Until the capital Quito residents left their homes and ran to the street, eyewitnesses reported.