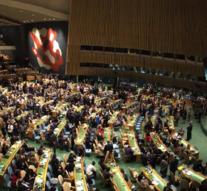 - Netherlands do not know if it gets a seat on the United Nations Security Council. Sweden will get at least one seat, but it is not yet clear whether the Netherlands or Italy given the other available spot. This is evident in a second round of voting this Tuesday.

Netherlands received Tuesday in the first round of voting 125 votes of the members of the UN. That was just not enough to get the seat right away. Italy received 113 votes. Sweden was at 134 votes enough to immediately secure a seat.

The Netherlands has for years lobbied for the spot in the powerful UN body.