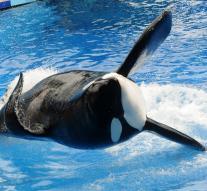 - Amusement Park SeaWorld will eventually put an end to the controversial shows with killer whales in the US San Diego. The company said Monday that to see the animals in 2017 should be in a more " natural environment ".

The decision follows a decision by the authorities in California, which last month demanded that SeaWorld to stop breeding killer whales in captivity. The company has been struggling since 2013 with declining visitor numbers. In that year the documentary Blackfish out, criticizing the way in which orcas in captivity.

It is still unclear how the new attraction difference with previous shows. It is unknown whether the changes are made at the company's theme parks in Orlando and San Antonio.