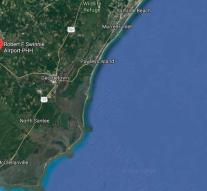 andrews - A plane with five people on board disappeared from the radar one hour after departure from an airport in South Carolina and probably landed in the Atlantic Ocean. According to BNO News, a search is ongoing but so far without success.

The Piper PA-31 had taken off at Robert F. Swinnie Airport in Andrews and on their way to the Bahamas. The American coastguard said that a distress signal was received. The contact with the cockpit was broken when the aircraft was about 175 kilometers east of Charleston. The identity of the occupants has not been disclosed.