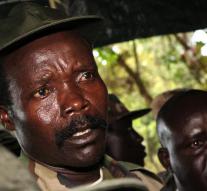 kampala - Uganda began withdrawing troops from the Central African Republic. The soldiers were there to hunt warlord Joseph Kony, which is still on the run. However, the mission of the troops is completed, the Ugandan army said on Wednesday.

Kony and his Lord's Resistance Army (LRA) years sowed death and destruction in several African countries. Uganda led regional forces in the fight against the LRA, but that battle would have been won almost. The battle group Kony would only count about one hundred fighters.

The Ugandan armed forces maintain that the LRA has been severely weakened. The decision to withdraw troops was motivated by 'the realization that the mission to neutralize the LRA has been successfully completed. 'The East African country had freed some 2,500 troops to fight the insurgents.

Human rights organization Invisible Children early in 2012 highlighting the crimes of Kony. The short film Kony 2012 has been viewed millions of times on the Internet.