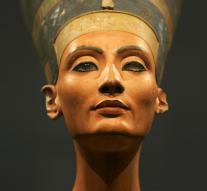 - In the tomb of Pharaoh Tutankhamun is a search underway for a secret, sealed chamber. It could be the tomb of Queen Nefertiti can be. That the Egyptian Ministry of Antiquities reported Saturday.

The British Egyptologist Nicholas Reeves is conducting the research. He came earlier to the conclusion that there is a secret room to be based on images with high resolution. Then he saw evidence of a hidden room that were not previously seen.

Queen Nefertiti, wife of Pharaoh Akhenaten, was known for her beauty. The couple ruled Egypt in the fourteenth century BC. Tutankhamun was the son of Akhenaten, but not of Nefertiti.