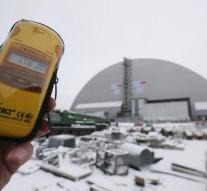 - Thirty years after the nuclear disaster in the Ukrainian Chernobyl is the ruin of the plant exploded sealed by a huge sheath of stainless steel. The Dutch company Mammoet was responsible for the logistics mega-operation, which was completed Tuesday with ceremonial. In recent weeks had pushed the colossus inching towards its final destination.

'Yes, we have succeeded,' shouted Ukrainian President Petro Poroshenko. The casing of 165 meters long, 260 meters wide and 110 meters high should the next hundred years, radiation from the exploded central stop. The concrete sarcophagus built in 1986 after the nuclear disaster, began to show cracks.

Porosjenko compared the structure of the Eiffel Tower and the Statue of Liberty because it is such a special piece of technology. It is the largest moving object ever built by humans.

'It's like a nuclear wound that touches all of us is closed,' said former chief of the International Atomic Energy Agency (IAEA) Hans Blix.