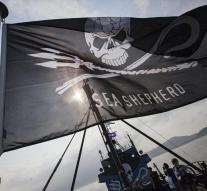 tokio - The animal rights activists of Sea Shepherd are currently stopping their struggle at sea against Japanese whalers. Founder Paul Watson said, according to Australian media, it hardly competes with the 'military technology' that the Japanese use to protect their fleet.

Watson said that his organization does not send ships to the Southern Ocean this year to interfere with Japanese whaling, which, according to Tokyo, has a scientific purpose. The whalers could easily escape the activists' vessels because they can live live through satellites.

In Japan, skepticism has been responded to the announcement that Sea Shepherd is taking a step back. An official of the Japanese fishing agency said to Reuters that it is still unclear whether the organization really plans to keep the whalers in peace this year. He also did not rule out that other activists were in action.