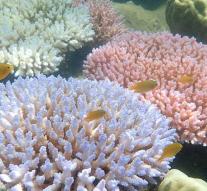 yerseke - Many coral reefs can not keep up with the expected rise in sea level. In particular, tropical coasts and low-lying islands have a greater chance of flooding and erosion. This appears Wednesday from international research, where the Dutch researcher Aimée Slangen of NIOZ Zeeonderzoek cooperated. The research is published in the science magazine Nature.

The international research team studied 200 coral reefs in the Caribbean Sea and the Indian Ocean. They compared the speed at which the reefs could grow in height with the expected sea level rise, and found that at the end of this century, even in moderate scenarios for climate change, only 3 percent of the reefs can keep up with the likely sea level rise. At present, 45 percent of the coral reefs have that capacity.

Sea level specialist Slangen expects that if the emission of greenhouse gases does not decrease, in 2100 most of the reefs will be more than half a meter deeper in the water. 'Reefs are natural breakwaters. If they lie deeper, they can slow down the waves less, allowing the waves to get closer to the coast. This increases the chance of erosion and flooding. '