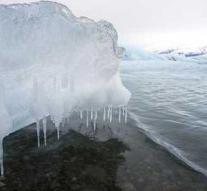 pasadena - The rise in sea level is faster and faster. The pace goes up every year. This is mainly due to the melting of ice on the South Pole and Greenland.

If the increase continues, the sea level around 2100 may be 65 centimeters higher than now. That is twice as much as previously predicted. This can cause major problems in coastal areas. 'And even that is a conservative estimate,' according to the American space agency NASA and the University of Colorado.

The researchers studied 25 years of measurements of European and American satellites. The calculations are in the science paper Proceedings of the National Academy of Sciences.

In the past 25 years the sea level has risen 7 centimeters. Half of that is because water expands when it gets warmer. That is called thermal expansion. The other half of the increase is due to the melting of land ice.

NASA is launching two new satellites this year to monitor the ice cap at the South Pole and Greenland and glaciers. If something changes, scientists can predict more accurately how the sea level rises.