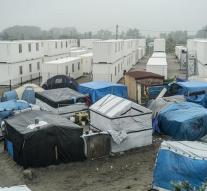 The asylum seekers were believed to be from climbing into the braking trucks and then fade as a stowaway in Britain. To facilitate that she tore pieces include guardrails and blocked the road.

At least one asylum seeker was arrested because he had thrown an object at police.


Around Calais bivouac thousands of asylum seekers hoping to make the crossing to Britain.