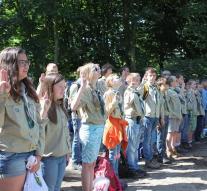 - Scouting The Jaguars from Rijswijk had a lot of proposed. After a long hike of about 15 kilometers of the 41 children and their carers would rest the feet on the pole and Perk-pitch edge of Meijerinkveldkampsweg in Twickel. But that was different.

The Post and Perk-pitch edge of Meijerinkveldkampsweg is intended for small groups of hikers or cyclists. Moreover, should be applied for a license from March activities in Twickel where more than twenty people participate.


The expulsion can expect little sympathy from the scouting '. Very sorry for the scouts it is quite a blemish on our summer camp,' said an angry supervisor Eric East. 'We deal with the Jaguars regularly and without problems of these places that have been found throughout the Netherlands', says coach Van Oosten, for whom this was already the fifth visit to the Beunders Field.

Last Tuesday the sleeping bags and air mattresses were packed up and left the scouts early Meijerinkveldkampsweg direction. At the end of the day the goal was achieved and could start preparing for an exciting night under the stars.


However, so far not come. 'When we were just eating ophadden we were visited by a special investigating officer of Twickel, which also sets us apart from two penalties for incorrectly parked cars summoned to immediately pack up belongings and leave. We have indicated that we the next morning early would leave, but did not succeed. '

For scouting had no choice but to comply with the requirement. 'We are up after midnight been busy to provide the children with cars to the base camp at the Tower Embankment in Beckum. Especially for the younger scouts this was very sorry. They were very tired and had welcomed sleep a night under the stars.'

The next day, Van Oosten Twickel went to talk to the investigating officer. 'We were completely innocent and hoped for a little leniency of Twickel. How are we to know for example that there has recently been determined that must be applied for a permit for large groups? Unfortunately remained the official at his position and was also fine not withdrawn almost 200 euros. '

'For us it is a considerable amount about the budget for a full day. The official is certainly within his rights, but a warning would have been sufficient in our eyes. We are here for the children to give the time of their lives. So that difficult. '

The scouts from Rijswijk see no reason to hold summer camps elsewhere in the future. 'This is a beautiful place and the people here are very friendly. It is likely that we come back. For the hike we will have to come up with an alternative.'