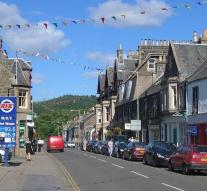 comrie - A former SS man has left 458,000 euros to the Scottish village of Comrie, where he was held as a prisoner of war. Heinrich Steinmeyer decided to do this in gratitude for the good treatment that the villagers gave him.

It reports the British newspaper The Guardian Sunday. Steinmeyer was captured at the age of 19 in 1944 in France and then transferred to Britain. Until June 1945 he was stuck in a camp in Comrie. Then put the Britons him to another camp. In 1948 he was released.

Comrie made Steinmeyer friends in the local community. It works some residents even once to smuggle Steinmeyer from the camp. ' They then took him to the cinema, where he saw his first film, '' said George Carson, son of a British friend of the German.

After the war Steinmeyer turned regularly return to Comrie and there made friends for life. He died two years ago at the age of 90. The desire to make money after at Comrie was recently approved by the Scots.