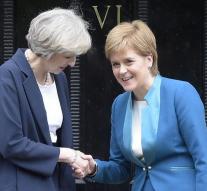 edinburgh - The Scottish Parliament on Tuesday by an overwhelming majority (90 to 34) the plan of the British Prime Minister Theresa May to leave the European Union rejected. It was a symbolic, non-binding vote, which only highlights how the different countries of the United Kingdom consider the Brexit. England and Wales are, Northern Ireland and Scotland at the exit from the EU.

Scottish Prime Minister Nicola Sturgeon has repeatedly asked when the time is above all to respect the interests of its country at the Brexitonderhandelingen. If not then Scotland should have the right to decide in a referendum on independence. 'This vote is important to check whether people listen to Scotland and if responds to our needs throughout the process,' said Sturgeon.