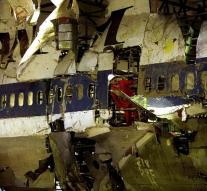 - Scottish and American researchers have identified two new Libyan suspects for the bombing of a Pan Am plane over Lockerbie Scotland's place in 1988. As a result, 270 people were killed.

The Scottish Public Prosecutor submitted the Libyan government was informed of the allegations and the request to interrogate the men along with the American FBI Investigation .

The Libyan Abdel Basset al- Megrahi was the only person ever found guilty of involvement in the bombing . He died in 2012 in Libya after he was released because he was seriously ill .