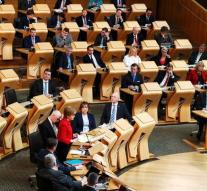 edinburgh - The Scottish Parliament on Tuesday agreed to a referendum on independence.

The referendum must take place between autumn 2018 and spring 2019.

Scottish First Minister Sturgeon wants to hold a new referendum after the UK had voted for withdrawal from the EU. However, a majority in Scotland voted against the United Kingdom and Gibraltar European Union membership referendum.