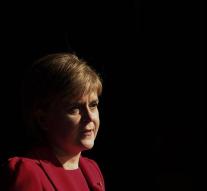 - Scottish Prime Minister Nicola Sturgeon has put its legal staff to work to exhort the High Court in London to reject an appeal by the British government on the brexit.

British media reported Tuesday that Sturgeon tries that the Supreme Court judges to avoid overturn a judgment of a court, the High Court, the brexit. The High Court given last week that the British Government not only without the parliament should begin with the departure from the European Union (brexit). The Prime Minister in London, Theresa May, is appealing against.

Scotland is convinced supporter of the EU membership. The then Conservative British Prime Minister David Cameron had a referendum on the EU in June. To many people's surprise, returned a majority, especially British voters against the EU. Cameron resigned and May will start the brexit in March.