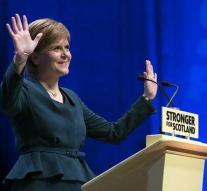 edinburgh - Scottish Minister Nicola Sturgeon said Friday in a letter asked her British colleague Theresa May for a new referendum on Scotland's independence. The request follows the termination of membership of the European Union by the United Kingdom. May sent the notice Wednesday to the EU headquarters in Brussels.

Sturgeon wrote in May that Scotland a referendum must now get it 'seems inevitable that the UK, the EU, including the domestic market of the union leave. 'She emphasized as Scottish media that this is very much against the will of the Scots. The United Kingdom and Gibraltar European Union membership referendum will also 'have a significant impact on our economy, our society and our place in the world. '